In your relationships with one another, have the same mindset as Christ Jesus: Who, being in very nature God, did not consider equality with God something to be used to his own advantage; rather, he made himself nothing by taking the very nature of a servant, being made in human likeness. And being found in appearance as a man, he humbled himself by becoming obedient to death— even death on a cross! Therefore God exalted him to the highest place and gave him the name that is above every name, that at the name of Jesus every knee should bow, in heaven and on earth and under the earth, and every tongue acknowledge that Jesus Christ is Lord, to the glory of God the Father.

As many of you who have read through a blog or two probably know… I should be doing homework. Especially this week- as I have a huge paper due today at midnight. HOWEVER…

My mind needs a recess and I thought what better semi-productive activity than to share with all of you some of the fun facts I have taken away from my current classes!

Primarily that the Early Church was the most peaceful, loving, absolutely insubordinate organization ever to be documented. And luckily for us- it is a rebellion with no end as to be a follow of Christ automatically marks you as one in complete opposition to the powers of this world (John 17:13-21).

Now don’t misunderstand me- in no way was the Early Church seeking to overtake the Roman government, but continuously advised believers to honor authority figures, from paying taxes to praying for them.

However the Early Church did directly challenge the Roman Imperial Rule of the day… in a way that is most impressive. Not until I dove into the historical context in which our Early Church Teachers were writing and living, did I fully understand that I may never fully comprehend the courage they had.

Bear with me, remembering that the Romans were literally on a track for “taking over the world” of their day, no-one was placing bets on their downfall just yet. While they allowed certain religions to remain intact (i.e. Judaism) they were also known for punishments such as feeding people to animals, whippings within an inch of their life, various forms of torture I would rather not think on and of course- crucifixion.

The Early Church was not risking persecution from just anyone- but from the one who had proven if given a choice between maintaining power and moral conduct- power was the moral of the day.

I have spent a lot of time with Paul the last several weeks. And I, who does not generally use foul language, would have to say Paul was an absolute tough and uncompromising individual, aka he was pretty BA.

While there are several arguments that could be made to back this statement up, I am going to focus on ten ways that Paul directly contradicted the Roman Imperial Rule’s beliefs of the day. And I mean EVERYONE followed these rules and thought processes… reference reason why above…

Reminder that these are statements Paul was not shy about sharing anywhere… Including in Rome itself. In fact he specifically appealed to Caesar and in a sense sent himself to Rome. Without hesitation. Pretty sure that is under the definition of “Holy Spirit Driven.”

1.) Roman Imperial Rule – Heralded Augustus as “son of God,” as he considered the “son” of the Caesar who claimed to be God. (Augustus was actually adopted by Great Uncle Julius Caesar… so have fun tracking that family tree… I did not.)

Paul – Jesus, who is the messianic seed of David, actually the True Son of God.

2.) Roman Imperial Rule – The Roman Emperor = Savior of the World…

Paul – Jesus Christ is the one and only Savior of the World.

Paul – Only one true God, and He is only known through Son, Jesus Christ.

Paul –  Do not worship emperor, that is idolatry. There is only one God, see #3.

Paul – Our citizenship is in heaven, and everything is ultimately under the rule of Jesus Christ.

6.) Roman Imperial Rule – Proclaim the “good news” that the “son of God” Augustus will usher in new era.

Paul – Proclaim the good news of the life, death and resurrection of Jesus Christ which has ushered in a new covenant and era.

7.) Roman Imperial Rule – We will unite all nations under Roman Empire.

Paul – There is unity of nations within the body of Christ, all are equal in Christ.

8.) Roman Imperial Rule – Roman Empire has established peace and security throughout the world.

9.) Roman Imperial Rule – “Miscreants” are expendable through crucifixion and other punishments.

Paul – Jesus was crucified through Roman rule and overturned the verdict.

Paul – Only God of Israel is sovereign and has eternal reign established in Jesus Christ.

Paul’s letters oftentimes receive a lot of pushback, especially pertaining to household codes and societal issues. However, when one digs deeper they will find that when approached in their historical context, they do not always carry the initial meanings our twenty-first century minds conclude.

For example: Paul’s stance on slavery.

Yes he encourages slaves to respect and work for their masters with integrity.

However, to conclude that Paul supports slavery would be completely unfounded. Why?

Paul writes that masters should look on their slaves as equals, treating them well in return, remembering that they too have a master in heaven. In Roman society that was completely unheard of… In the book of Philemon Paul goes as far as to ask that the slave, Onesimus, be welcomed back as a dear brother. This is followed by an appeal for his release so he could come and teach alongside Paul.

Paul lived in a society where 60% of the population were slaves. Meanwhile they, the followers of Jesus Christ, were a small persecuted minority. Paul wasn’t going to change the law. But he planted the seeds for change to occur in the hearts of men, trusting one day they would lead to a cultural change independent from government rule.

Paul’s other writings and teaching on the “household codes” were equally outlandish in the context of Roman society at the time. We could go more into that (and I probably will the next time I have a huge paper looming) but I have 1 more fun fact that I want to share before I sign off.

God watered Paul’s seeds, and while there are countless examples of His work throughout the centuries, lets go back to approximately A.D. 361 – 363. We are under Emperor Julian’s rule, the title/ term “Christian” has been coined and persecution persists.

Regardless of extreme opposition, Emperor Julian is nervous, he is nervous that somehow “Christian’s will take over the whole world through the stealth of their good deeds.” Don’t believe me? Luckily I screenshot it out of the text book, and yes I have the incredible book all this wonderful information came from cited below- which I highly recommend as it covers a vast amount of information, exceedingly more than I have fit in this post, and with a great deal more eloquence. 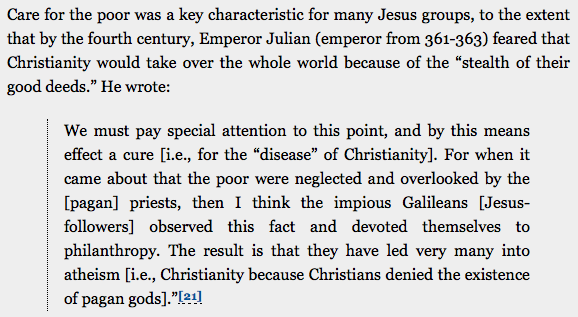 Well, friends, my homework calls and I have just over 14 hours to hit the submit button. I hope you enjoyed meeting Paul as much as I did!

My prayers and thoughts are with you all, as well as hopes for a great weekend!