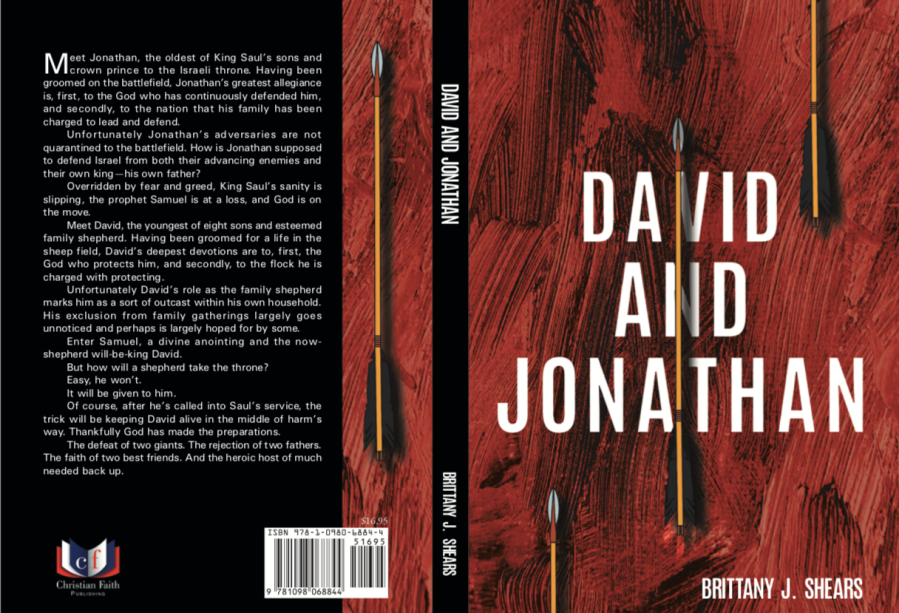 “One who has unreliable friends soon comes to ruin, but there is a friend who sticks closer than a brother.”

To those on a mission- I will note that links to the paperback version of David and Jonathan are at the bottom of this page! (Amazon and Barnes & Noble)- as of 03/2021 we are excitedly waiting for the ebook versions to be transcribed and out!

Meanwhile- this page’s purpose- what’s a good novel without a backstory?

1. eluded me my entire Christian upbringing and

2. struck several personal chords at once.

Five years later, in 2020 at the age of 29, I still find myself discovering stories that strike several personal chords throughout various stages and places in my own life. However, the story of David and Jonathan is still one I cannot shake, nor ever want to.

My rendition is an attempt to remind myself, and whoever else is in need of remembering, that the heroes of our Bible were also human. They were far from perfect, always seemingly- desperately unqualified, and they never went it alone.

With all of this said, join me on a journey to ancient Israel, where I like to believe amid chaos and confusion- also reigned courage and hope… and a bit of well intended shenanigans.

Meet Jonathan, the oldest of King Saul’s sons and crown prince to the Israeli throne. Having been groomed on the battlefield, Jonathan’s greatest allegiance is; first to the God who has continuously defended him and secondly to the nation that his family has been charged to lead and defend.

Unfortunately, Jonathan’s adversaries are not quarantined to the battlefield. How is Jonathan supposed to defend Israel from both their advancing enemies and their own King- his own father?

Overridden by fear and greed King Saul’s sanity is slipping, the prophet Samuel is at a loss and God is on the move.

Meet David, the youngest of eight sons and esteemed family shepherd. Having been groomed for a life in the sheep field, David’s deepest devotions are to; first the God who protects him, and secondly to the flock he is charged with protecting.

Unfortunately, David’s role as the family shepherd marks him as a sort of outcast within his own household. His exclusion from family gatherings largely goes unnoticed, and perhaps is largely hoped for by some…

Enter Samuel, a divine anointing and the now shepherd, will be king, David.

But how will a shepherd take the throne?

It will be given to him.

Of course, after he’s called into Saul’s service, the trick will be keeping David alive in the middle of harm’s way. Thankfully God has made the preparations.

The defeat of two giants. The rejection of two fathers. The faith of two best friends. And the heroic host of much needed back up.

Hello, again, my wonderful friends- I do not know if you can tell this week’s schedule has me a bit backed up on posting-

However, I wanted to give all of you who do not follow the Declare HopeFacebook Page an update on how David and Jonathan is progressing-

We are still waiting for the electronic copies for David and Jonathan to be transcribed for Kindle, Nook and Apple eBooks.

Meanwhile, my publisher did create a book trailer for David and Jonathan which is available on youtube- I am putting a link here if you would like to check it out- David and Jonathan Book Trailer (I have to admit, I was humbled they put it to fantastically epic music)

Stay posted for an upcoming discussion concerning my latest project (and potential appearances)! (My hope is that the explanation point conveys my excitement as I am currently without emojis) – Also – possibly stickers… but that is a story for a different day!! (Note: 2 Explanation points!)

As always much love friends, Britt

P.S. You can find links to the paperback versions of David and Jonathan below;

David and Jonathan; Barnes and Noble